Welcome to a new season with our PHFNC Season Opener Newsletter 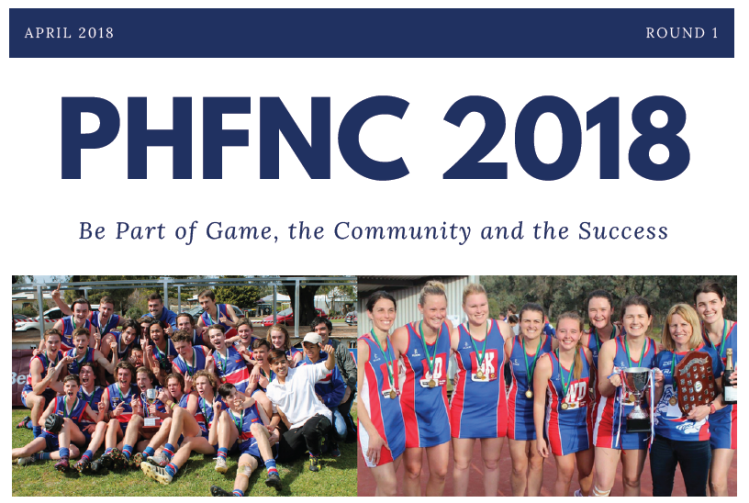 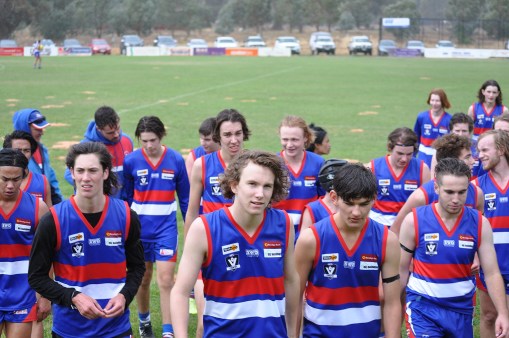 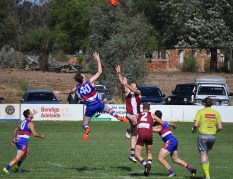 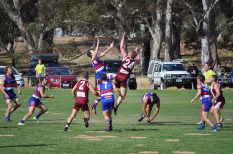 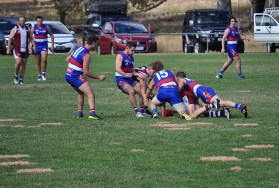 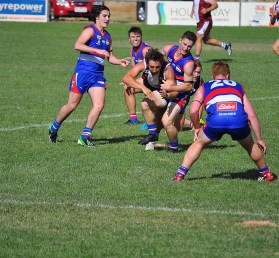 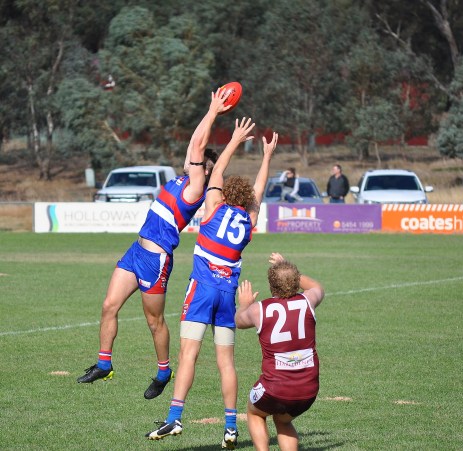 Our season opener saw us travel to Newbridge where the weather was no where near as warm as the welcome message on the bottom of Newbridge’s new electronic scoreboard!  The wind and rain certainly reminded us that this is a winter sport and had us all reaching for our jackets.  Eventual results for our boys were 2 wins and a narrow lose for the Reserves in the final minutes of the game.

It was a new look outfit as the young pups ventured to Newbridge for Round 1 with 14 debutants in the red, white and blue. But that didn’t stop us picking up where we left off last season with a fantastic display of football in some very difficult conditions. With a 53 point lead at quarter time the boys never looked back, continuing to increase the margin at every change. The final result was a 175 point victory with Reece Blake making the forward line his own kicking 8 goals! Co-captain Mitch Stephens was exceptional in the midfield whilst Ed Caburnay and Mitch Gunther snagged 5 and 4 goals respectively. A great way to start the season and we looked forward to seeing this new group gel together over the coming weeks.

The boys headed down to Newbridge for round 1, sadly we didn’t get the 4 points.
The boys had a 15 point lead heading into the last quarter but ended up losing by 5 points.  It’s a good lesson for the lads as we can only build from here.  Better players for the day were Dylan “captain courageous” Tonkin who was at the bottom of every contest, Mitch “fortnight pro” Dingwall was consistent all day, Brendan “loves a frothie” Hancock also played well, Rhys “loves the 2s” Brown ran hard all day and got plenty of the pill. Good signs for the 2’s and next week, we will bounce back. #upthe2’s.

We came into Round 1 pitted as massive underdogs against the premiership favourite Newbridge. Kicking against the breeze in the first quarter our pressure, tackling and defensive mindset was superb as we kept the Maroons goalless and led by 4 points at the first break. The second term was where we stamped our authority on the game utilising the blustery, rainy conditions to our advantage and increasing the margin to 26 points at half time. The second half was a scrappy battle as Newbridge had most of the play in their half of the ground but again, our defence was excellent, taking intercept marks and constantly applying frantic pressure to ensure every opposition disposal was hard work. The Maroons closed the gap to within a goal in the final term but the boys held their nerve, winning by 9 points. Matt Klein-Breteler was superb across half back whilst in his debut game Adrian Holland did a fantastic job giving us first use of the football through his ruckwork. A great result to start the season and we look forward to every challenge that confronts us going forward.

On a sad note we offer our deepest sympathy to the Beet family on the passing of Mary, a life member of our club.

At 10.45am this week the U18 footballers will be unveiling their Premiership flag and at 2.15pm the A Grade netballers will have their unveiling, don’t forget to come and have a look.

After the game this week the social committee have organised a Scribble Party and Ipod Shuffle night, come along and join in the fun, it should be a great night.  Tea will be available from 6pm.

In freezing conditions with some mild rain, the A grade team fought their way to win the first quarter after being down by 5 goals. After a rocky start, the team began to gel and the girls found their rhythm and capitalised in growing their lead each quarter. Delainey Holmes, our new star shooter who is always an accurate shot, was our best player. A grade should be happy with their win, Pyramid Hill 43 defeated Newbridge 26.

Very wet conditions caught us off guard and our speed and shooting were all difficult. Milly settled in well, working great in the ring in defence alongside Hayley. Our captain Lauren was consistent with encouragement as Newbridge shot goals accurately and increased their momentum throughout the game. In the dying seconds we were unlucky to go down by 1 goal; but it was a great game, despite the weather conditions. Best on went to Milly Saville, and the final score was Pyramid Hill 34 defeated by Newbridge 35.

First game back and the girls were eager to start the season off well. Newbridge provided four seasons of weather in one game and the girls battled the wind and rain throughout some great team play despite the girls never having played together. We are looking forward to a great season with hopefully plenty of wins and lots of fun to come! With a lot of talent from the new girls, Eimer Draper was best on, shining in the ring with her defence. Final score was Pyramid Hill 15 defeated by Newbridge 31.

First game back and it was fantastic netball between both teams, with goal to goal for the first half. In the last half, the Pyramid girls got in the lead and had a well deserved win. It was an incredible win for the C reserve team after they didn’t take home any wins in the 2016 season. Rain, hail or sunshine, the girls should be happy and proud of their win and great game play. A stand out player was Katelyn Wandin. The final score Pyramid Hill 30 defeated Newbridge 20.

The girls took to the court on a wet and windy day. Both teams fought hard and by the end of the first quarter, the scores were even. The second quarter saw our Pyramid girls lift and the sky clear. Things were looking up for the girls, with excellent defence, lots of intercepts and quality game play. The girls held their lead for the rest of the game and brought it home with a comfortable win. The Under 17 girls are up and about!! Star players of the day were Amy Murfitt and Maddy Wagner and final scores were Pyramid Hill 36 defeated Newbridge 28.

After a spectacular 2016 season, the under 15 girls are back on the court for a great season ahead. It was a wet and windy day but the team worked well together. The shooting was impressive and the defence was exceptional. We came out with a great win, Pyramid Hill 53 defeated Newbridge 1. Two girls, Sammi Moon and Imogen Broad were our stand outs for our round 1 game.

It was great to see the girls line up in their new dresses, full of smiles and excitement for their first netball game for the season! Newbridge were quick out of the blocks and held a commanding lead at half time, despite Pyramid’s tireless efforts. The Pyramid girls fought back hard in the second half with some fantastic passages of play. Well done girls. Our little star of the day was Carolyn!