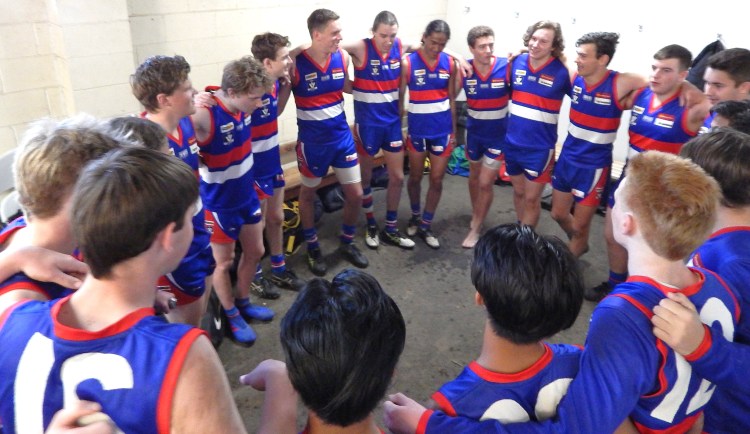 At Marong, Pyramid took on a well skilled MGYCW team as the sun was shining. From early on, it promised to be a tight game and the first half saw competitive game play. The second half proved to be lacking the game play needed to keep up with MGYCW and a loss followed. Pyramid Hill 17 df by MGYCW 36. Good luck to the Young Pups who take on Marong this Sunday!

On a magnificent day, the Dogettes stood up to the challenge against MGYCW and started with fantastic defensive pressure. There was a great display of netball, with lots of contesting. Liv Hampson was on fire, taking some brilliant intercepts in the ring. The girls held a one goal lead at first quarter time. Amy Murfitt shot superb long bombs into the goal ring, keeping the Dogettes up with the Eagles’ pressure. Going into the last quarter, the Pyramid girls were down by three goals but put on a massive show to draw even with MGYCW at every shot. Fresh legs come onto the court, with Imo Broad giving the girls some speed and Ella Rowe was shooting from everywhere in the ring with some spectacular goals. Unfortunately, in the final minutes, the Dogettes began losing concentration and made timely errors which allowed the Eagles to widen the margin. Pyramid Hill 50 df by MGYCW 54. A big congratulations to Amy Murfitt for receiving the LVFNL Best On. Good luck to the girls who will take on Bridgewater this Sunday!

U/18’s
Our finals campaign got off to a great start on Saturday against Inglewood. We started strong, kicking 5 goals to none in the opening quarter. Through the game we continued to dominate the contested ball and spread really well, kicking 5, 4 and 7 goals in each quarter to whilst keeping Inglewood to just 1 behind. The game, although one sided, showed how much we have improved over the season. Our ball movement, pressure, and defence were all exemplary. Our best players were Nick Skinner, Matt Farrell, Zac Dingwall, and Connor Mayman. We look forward to next Saturday, which presents an opportunity to progress to the Grand Final. Our boys are relishing the chance to contest with the undefeated Maiden Gully YCW Eagles.
Final Scores: Pyramid Hill 21.13.139 defeated Inglewood 0.1.1
Goals: Ed Caburnay 5, Nick Skinner 4, Zac Harrison 3, Kobe Schmidt 2, Taynan Richardson 2, Mitch Gunther 2, Carlos Ly 1, Raidan Forster 1, Ben Forbes 1.
Brett Hercus Transport Award: Matt Farrell.  Good Sports Award: Zac Dingwall. Bakery Cafe Award: Connor Mayman.  Special Award: Matt Carroll.  Others: Kobe Schmidt, Carlos Ly, Mitch Gunther, Ed Caburnay.
Last Sunday we hosted the 1st elimination final at Pyramid and a huge Thank You to all our volunteers who gave up their Sunday to help this day run smoothly.  Volunteers are the backbone of any organisation and without them we certainly wouldn’t have a club.
Another Thank You must go to Mawsons Quarries, a sponsor of our club, who so generously  donated gravel last week so that our grounds and surrounding areas were in tip top condition.  Your support of our club is greatly appreciated.

It was an incredibly cold and wet day at Mitchell Park, but the Ressie girls warmed up and were pumped for tight contest against the Serpentine Bears. The Doggies started off very strong, taking the first goal and presented themselves eager for a win. Danielle “Catch Me If You Can” Shay was always where she needed to be and partnered beautifully with Kirra “Powerhouse” Sheppard to work the ball into the goal ring. Goaling duo Tylah “Tip Toe” Thomas and Katelyn “The Unstoppable” Wandin put on a show with their beautiful shooting and fought for every loose ball and rebound. Emma “Always Consistent” Murfitt, Jan “Scary Queen” Farrell and Kirsty “The Comeback” Twigg used brilliant defensive pressure and secured impressive intercepts that were executed down the court and into the Doggies’ goal ring. Going into the last quarter there was a 2 goal difference, proving to be an intense and tight game leaving anyone to take home the win. Despite the down pour of rain – leaving the court, the ball and the girls wet – the Pyramid girls fought incredibly hard until the very last second and should be extremely proud of their efforts! Pyramid Hill 27 df by Serpentine 32. Congratulations to the Ressie girls for another brilliant season and thank you to Super Coach Kell Gould for her amazing support and guidance every week!