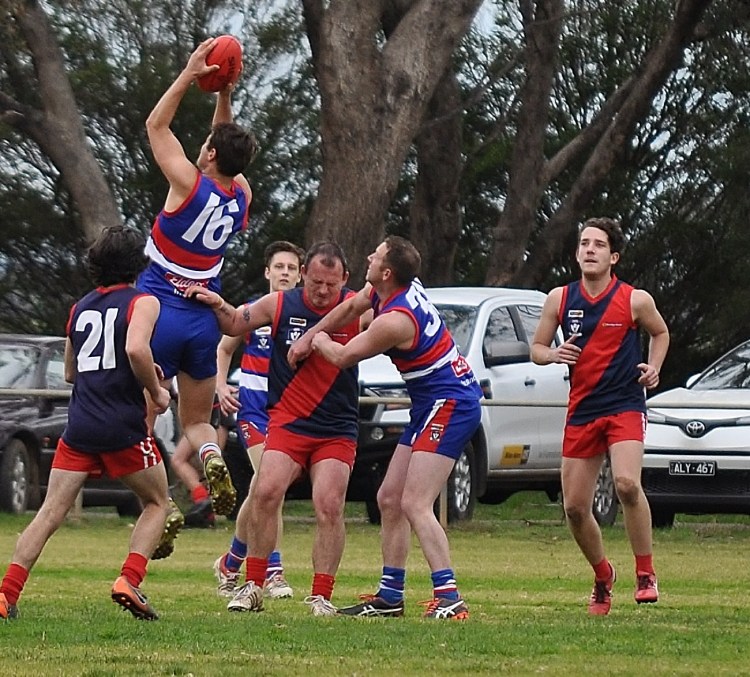 Off the back of a nail biting loss against MGYCW, the pups produced a strong win against Calivil last Saturday. Our accuracy was below average in the first quarter, kicking 2.8. We were able to turn this around in the second term, with 8.2, the rest of the game progressed well with some exquisite transitions from half back to the forward 50. We were happy with our pressure around the contest as we were able to maintain it right until the final siren. Nick Skinner relished his role as a big body mid, instigating numerous clearances. When he rotated to the forward line he presented well, took superb contested marks and kicked three majors. Ryan Salvador was on fire, taking one handed grabs and finishing well with 5 goals. Zac Dingwall was once again a pillar in defence clunking multiple intercept marks and orchestrating many of our stellar passages of play off half back. Tain Piercy was as calm as anyone with ball in hand, he always seemed to have plenty of time, even when surrounded by opposing players. Our form is building nicely as we edge closer to finals and we hope to continue this high level of play.
Final Scores: Pyramid Hill 21.17.143 defeated Calivil 1.1.7
Goals: Ryan Salvador 5, Ben Forbes 4, Ed Caburnay 3, Nick Skinner 3, Koby Schmidt 2, Matt Carroll 1, Matt Farrell 1, Tain Piercy 1, Mitch Gunther 1.
Brett Hercus Transport Award: Nick Skinner. Millers Ag Supplies Award: Ryan Salvador. Pyramid Bakery Cafe Award: Zac Dingwall. Special Award: Tain Piercy. Others: Koby Schmidt, Carlos Ly, Ben Forbes, Matt Farrell.
Reserves
A massive day for the boys as we try to keep the winning momentum rolling. The boys played a great game keeping Calivil scoreless and having an 18 goal win. Ryan “ Shane “ Watson dominated the ruck all day to set the boys up in the midfield. Nick “ Big Man “ Tanner was a vital target up forward for the boys giving them an outlet and the Big Man kicked a solid 2 goals himself. The Dingwall Brothers had a day out, Zac “ The Speed King “ ran all day off the half back line to set up Mitch “ One Inch “ who slotted a very nice 6 goals. Rhys “ The Machine “ Brown was in mint form, getting bulk clearances and setting up the forwards. Matt “ MM “ Moon was in solid form in defence getting bulk intercept marks and setting up the play from the half back line. Woof Woof #upthe2s
Final Scores: Pyramid Hill 18.10.118 defeated Calivil 0.0.0
Goals: Mitch Dingwall 6, David Mann 3, Chris Milroy 2, Nick Tanner 2, Xav Ryan 2, Ryan Watson 1, Connor Gibbons 1, Zac Dingwall 1.
National Hotel Award: Ryan Watson. Victoria Hotel Award: Nick Tanner. Good Sports Award: Zac Dingwall. Others: Mitch Dingwall, Rhys Brown, Matt Moon, Ross James, Joel Woolhouse, Peter Gargan.
Seniors
After a devastating loss last week the boys were keen to try and get that winning feeling back. It was a grind of a game going into half time but after a reset the game opened up and we kicked away to have a solid 10 goal win. Andrew Dobby was in mint form throughout the day and was clearly best on field. Gavin “ Ego “ James was just a machine, playing out of his weight division throughout the day.  Sam “ The Parcel “ Mewett had an outstanding game with great two way running, he’s having an outstanding year. Billy “ The Kid “ Micevski was a solid contributor throughout the day, his great forward pressure set up a lot of scoring opportunities. Young Jake Willcocks dominated the air space, took some great marks and is coming into nice form. Benny “ Daddy “ Dalton was a bull, winning the ball on the inside and spreading well on the outside. Woof Woof #upthe1s
Final Scores: Pyramid Hill 14.12.96 defeated Calivil 4.4.28
Goals: Adrian Holland 3, Bailey George 2, Billy Micevski 2, Matt Klien-Breteler 2, Steven Gunther 1, Jake Willcocks 1, Sam Mewett 1, Lachie O’Toole 1, Andrew Dobby 1.
Victoria Hotel Award: Andrew Dobby. National Hotel Award: Gav James. Others: Sam Mewett, Billy Micevski, Jake Willcocks, Ben Dalton, Steven Gunther, Scott Mann.

The Pyramid Minis team played six fantastic quarters of netball against Calivil. It was great to see that the girls had a lot of opportunities to goal with some successfully going in. There was incredible team work and the girls were able to take some wonderful intercepts in the midcourt. It was great to see everyone enjoying themselves on the court!

It was a tough day for the 13’s girls who came up against a stronger and taller Calivil side. With a few of the regular girls out, there was four girls come up from the Minis – Charli Moon, Eloise Walters, Margarette Caburnay and Delaney Wagner. While the scoreboard showed the Pups to be soundly beaten, it did not show  how the passing improved as the game progressed, or how they continued to give it their best. Charli Bone kept her head up and tried her best to launch the Pup’s attacking and Charli Moon never stopped running and leading. The girls in the mid court worked hard, but unfortunately Calivil were hard to stop and they showed great accuracy in goals. Continue to work hard young Pups, as finals are fast approaching! Calivil 48 df Pyramid Hill 6.

The Dogettes showed some great displays of netball skills today, with some brilliant transitions of play. However, Calivil were able to cling on to keep within eight  goals at half time. The girls worked hard on their defensive pressure across the court, but unfortunately, Kearley went down with an ankle injury that forced the girls to make some changes. It took the young Pup a bit to adjust and step up, but were able to run out victors by eight goals. The awrd went to Sammi Moon. Pyramid Hill 51 df Calivil 43.

Not a great start to the game, with Liv rolling her ankle during the warm up and as a result, the 15’s girl were put on the court to help out, with Sammi Moon and Ava Broderick sharing the Centre position. The Calivil girls proved why they were positioned on top of the ladder, putting pressure on the Dogettes all over the court. To the girls’ credit, they never gave up, continually supporting each other. The goalers worked tirelessly in and around the ring, shooting some beautiful goals under the pressure placed upon them by the tall Calivil defenders. Pyramid Hill 42 df by Calivil 66.

The Ressie girls took the court in Calivil eager to get another win for the season. Going down to Calivil last match by only six goals, the girls pulled out their “A” game! The defensive pressure throughout the entire game was flawless, with Emma and Jan not letting a loose ball get away and Morgan completely blocking out all options to the Calivil WA. C grade star Becca fitted in extremely well, taking multiple intercepts and working the ball through the mid court swimmingly with Dani assisting. Katelyn and Kirra worked very hard inside the ring the entire match, with Katelyn barely missing her goals. Coach Kell alongside injured sidekick Mik could not fault the girls all game from the sideline, and the girls pulled an impeccable win out of the bag with the end scores Pyramid Hill 54 df Calivil 20. Best on was awarded to Danielle Shay.

The C grade girls took the court with a bit of a mix of a team this week, but nonetheless, the girls gave it their all! Hannah Mullins, who got best on for the match, was on fire with her shooting at every angle and getting them in, with the assistance of Kirra. Even the Calivil girls said “does she every miss?” Becca ran the mid court with Chels, stepping in to play her first C grade game for the season. A consistent defence regime from dynamic duo Kell and Jess, and WD from Georgia “Truck” Holland, but unfortunately the shooting from Calivil was just too strong. The Doggies fought hard the entire time but went down Pyramid Hill 40 df by Calivil 50.

Pyramid raced onto the court knowing that the game would be tough against Calivil. The ladies in red, white and blue maintained great pressure during the first half, but Calivil had an eleven goal lead going into the second half. The Pyramid girls kept up a good fight but Calivil took home the win. Pyramid Hill 47 df by Calivil 70. Best on was awarded to both Chloe Broderick and Hannah Mullins.

The A Grade girls took to the court determined to have fun and play hard. Grace was on fire, driving harder than the team has seen and delivered bullet passes into the goalers. Bec and Amber put on a show, shooting beautifully making the most of their opportunities. The defenders put the Calivil attack under great pressure and supported Em in the Centre who ran her heart out the entire match. Calivil came out on top but the effort from Pyramid was one to be proud of with the final score Calivil 63 df Pyramid Hill 47. The best on went to Grace Broderick.